– GROUNDBREAKING NEW DANCE STYLES FROM THE STREETS OF ASIA –

DANCE DANCE ASIA is back to Bangkok!

Street dance was getting more attentions these days, particularly breakdancing, thanks to the news that breakdancing will be included as a new sport in the Olympic program from Paris Olympic in 2024.

Launched in 2014, DANCE DANCE ASIA showcases amazing Asian street dance talent. It aspired to promote and foster cultural exchange in Asia through the medium of street dance, one of the most exciting and innovative forms of performing arts today. It promoted the brilliant dance companies to perform both in and outside of Japan and the dancers in this region to create international collaboration project.

As a part of this project, Japanese dance groups, UMEBOU, 90’s and Tokyo Gegegay performed in Bangkok in March 2015 and the Zoo Thailand was invited to perform in Tokyo in October 2015, with big applauses from the audience for both showcases. DANCE DANCE ASIA had staged performances and tours fifteen times in nine cities in Asia, including in Tokyo, with nearly 400 dances and artists, attracting a total audience of over 30,000.

The Japan Foundation Asia Center was holding the “Asia in Resonance 2019”, a series of events in Japan and Southeast Asia to introduce its various cultural exchange programs and to reflect the results of its achievements in the last five years. DANCE DANCE ASIA in Tokyo in July 2019 was one of the main programs.

The Bangkok tour 2019 reflects the huge sensation created by the performance in Tokyo. It will present the original works by 21 leading street dancers and musicians from Japan and all over Southeast Asian countries (Laos, Malaysia, Singapore, Thailand, the Philippines and Vietnam) will meet again to showcase a unity of outstanding techniques, exceptional expressions and music.

To coincide with this show and to encourage the local dance scene, free workshops by the world leading dancers will be held on October 28 to 30 at 7pm at Host Bangkok.

We sincerely hope to attract a wide audience in order to draw attention to the value and potential of street dance and to build bonds between Japan and Southeast Asia. Look forward to DANCE DANCE ASIA in Bangkok which compiles the five-year history of DANCE DANCE ASIA!

Performance is set up by 5 Bboy dancers. Expressing feats of breakdancing techniques with elements of contemporary dance. Portraying the struggle of being in the gap between one’s own passion for dance and pressure from society.

A collaboration by a multitude of dancers from a diverse range of styles such as martial arts, hip hop, breakdance, pop and house.  Each individual pursuing their own dream and the pressure to give up dancing to face the obstacles of life. Backed up by a light hearted human beatbox.

A globally acclaimed 18-year-old super dancer kEnkEn, respected by artists such as Koharu Sugawara and MIKEY, will be joined by Kaho Abe as a choreographer/assistant director for an entertainment packed performance featuring unique dancers from the next generation of house/hip-hop, jazz/contemporary, and waack/vogue. 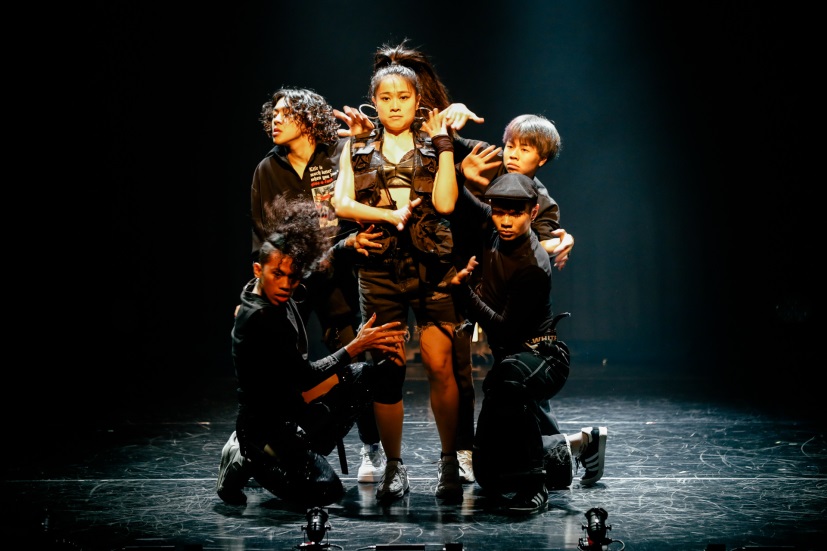 Born in Hanoi in 1988, Phạm Khánh Linh a.k.a. 3T is a choreographer and dancer. Starting his dance career in 2003, his b-boying skills have won him the Vietnamese dance events Got to Dance Vietnam Competition 2014 and Vu Dieu Green Vietnam 2013. He has also garnered titles at such prestigious contests as Battle of the Year (the world’s largest breakdance event), R16, and Freestyle Session. From 2012, he started performing contemporary dance and has won dance contests in Vietnam. 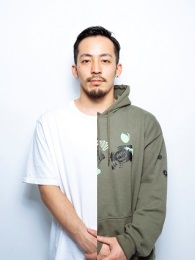 Born in Kumamoto Prefecture in 1990, KATSUYA is a dancer. Starting to dance from elementary school, he went on to win Japan’s top dance event Old School Night three times and was also runner-up at Battle of the Year, the world’s biggest breakdance event. His television appearances include Super Chample on Chukyo TV. Since relocating to Tokyo, he has achieved success on the global dance scene, representing Japan for the solo battle of the UK B-Boy Championships and winning Battle of the Year three years in a row as part of the group The Floorriorz. He has performed in numerous showcases, workshops, and stage productions at home and abroad.

Born in Chiang Mai in 1984, Nikii is a choreographer and dancer. He started dancing from the age of six and has worked with a wide range of genres from breaking to hip hop, popping, locking, soul, Latin, and street jazz. In addition to his own choreography, he also serves as a judge for dance contests.

Born in Niigata Prefecture in 1985, Takuro Suzuki is a choreographer, director, and dancer. He is an adjunct instructor at International Culture School and the Department of Scenography Design, Drama, and Dance at Tama Art University. He is the leader of the dance company CHAiroiPLIN, whose output freely incorporates dialogue, song, and onomatopoeia with the aim of producing shows that can be enjoyed by all ages. In addition to guest performing for Yukio Ninagawa’s Saitama Next Theatre, he also takes part in many dance events abroad. His numerous awards include the Encouragement Prize at Yokohama Dance Collection EX 2011, a finalist for the 9th Toyota Choreography Award, the 46th Newcomer Award from the Dance Critics Society of Japan, and the 9th Japan Dance Forum Award.

Born in Saitama Prefecture in 2001, kEnkEn is a dancer and choreographer. Starting to dance already in kindergarten, he made his professional show debut in 2011 in Michael Jackson Tribute Live and then studied dance at LA Dance Camp. He went on to win VIBE JAPAN and perform at DANCE DANCE ASIA in 2016 and 2017 as a member of BLACK LIP BOYZ. His backup dancer and choreography credits include SMAP, Tokyo Gegegay, E-girls’ Ami, Yasuyuki Okamura, Akiko Wada, and MISIA. He has also frequently performed with Koharu Sugawara. He is currently involved with making music that he performs with his body. The future prospects of his unique style of dance closely attuned to sound are highly anticipated. 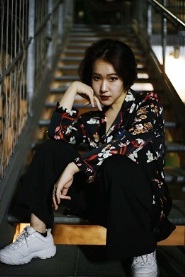 Dancer and choreographer, Kaho Abe was born in Saitama, Japan and started dancing at the age of 7. She won the dance choreography contest at Legend TOKYO Chapter 5 and has appeared as a dancer in major Japanese artists’ music videos (Yutaka Kobayashi, AKB48, NAOTO INTI RAYMI, etc…).

She participated in the production of ‘Playhouse’, directed by Shuko Nemoto, as an assistant choreographer and is now actively involved in various theatrical productions. 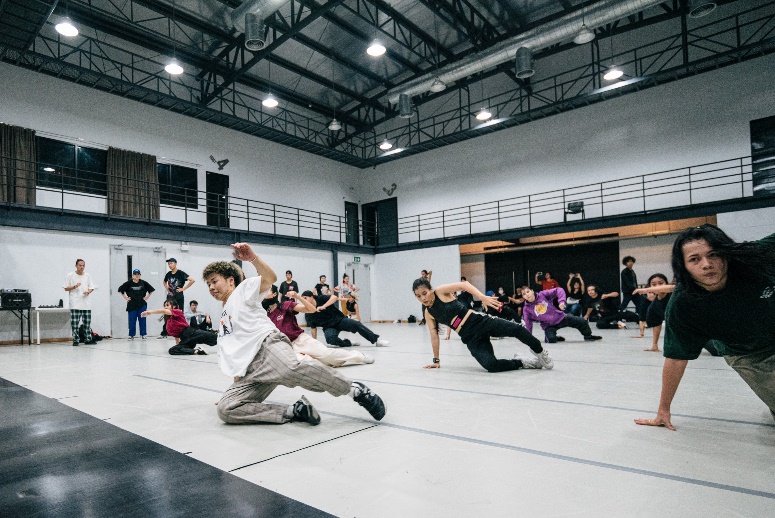 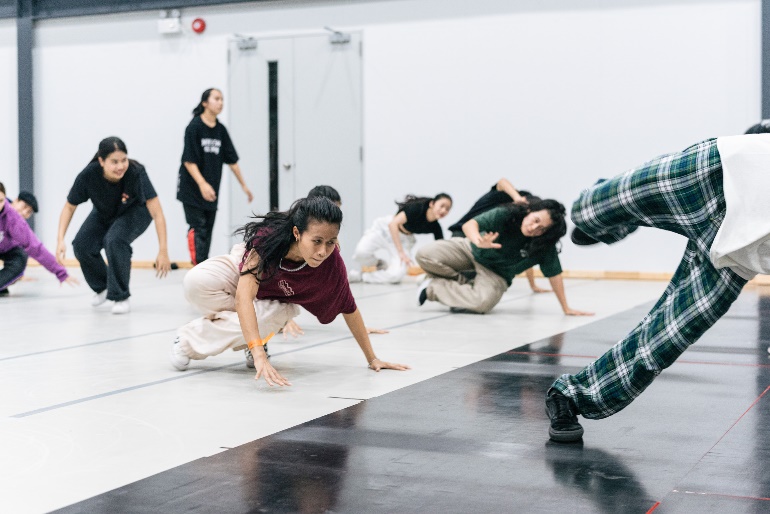 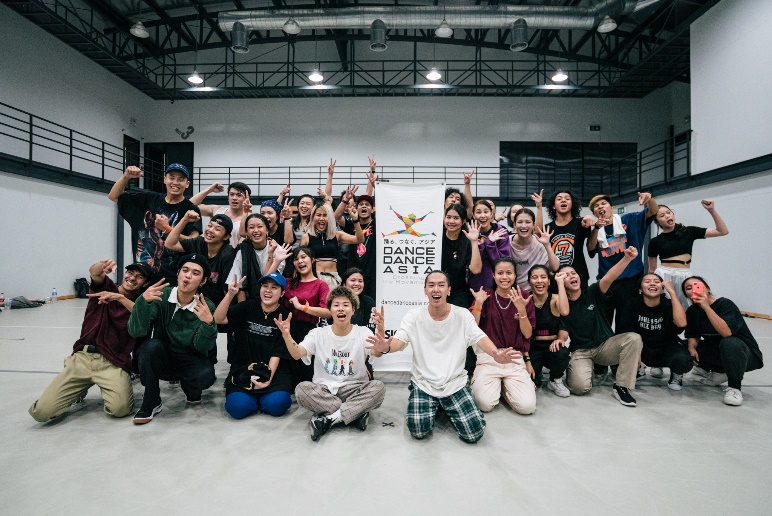 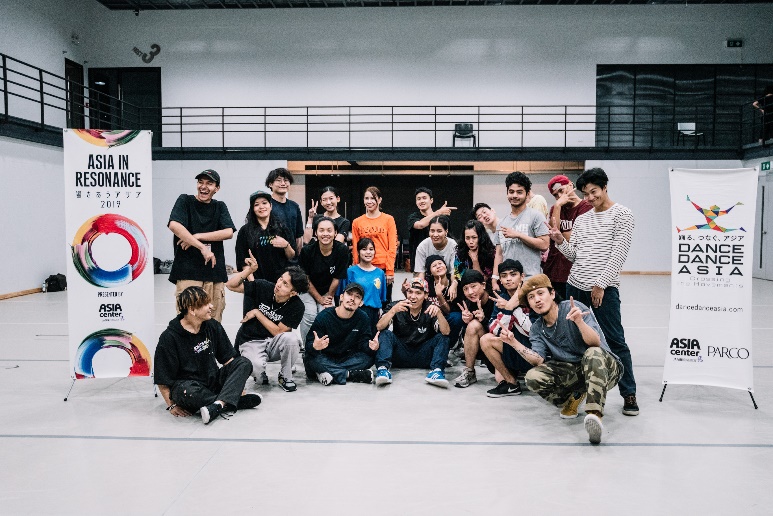 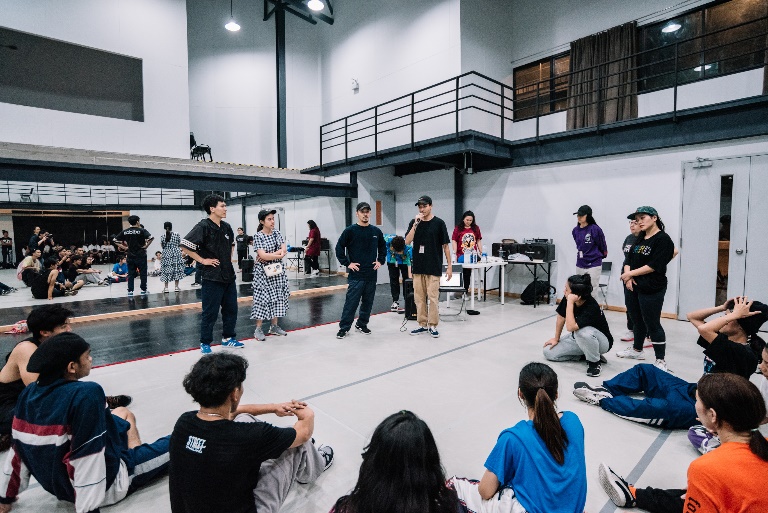 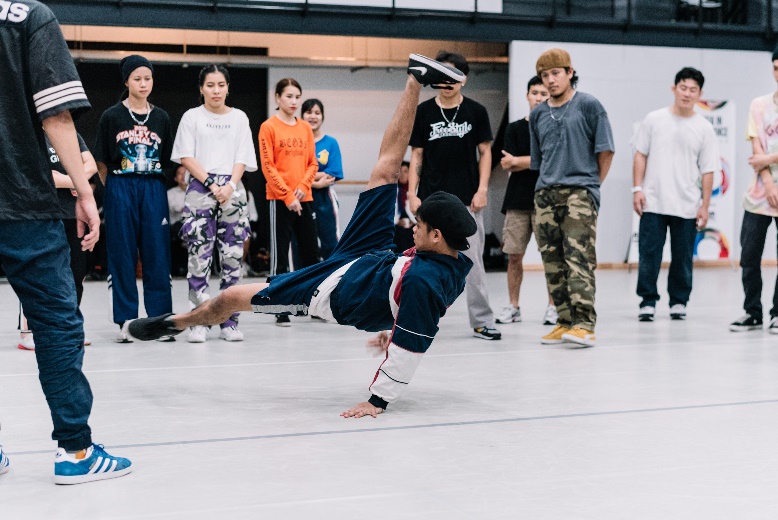 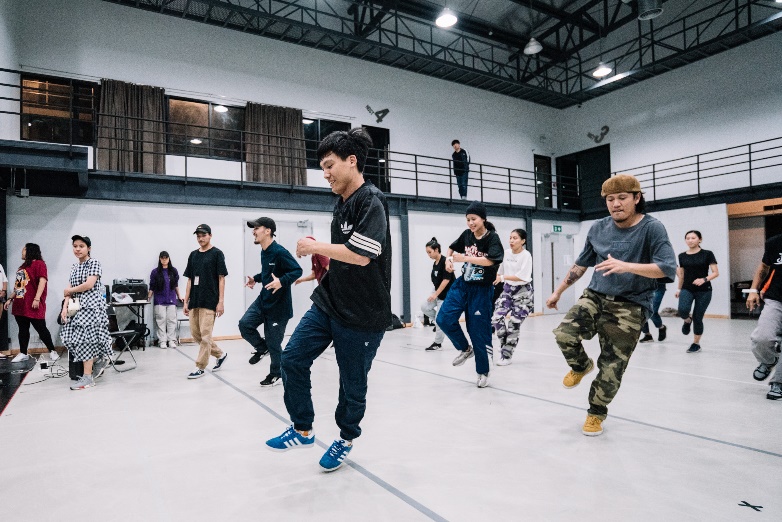 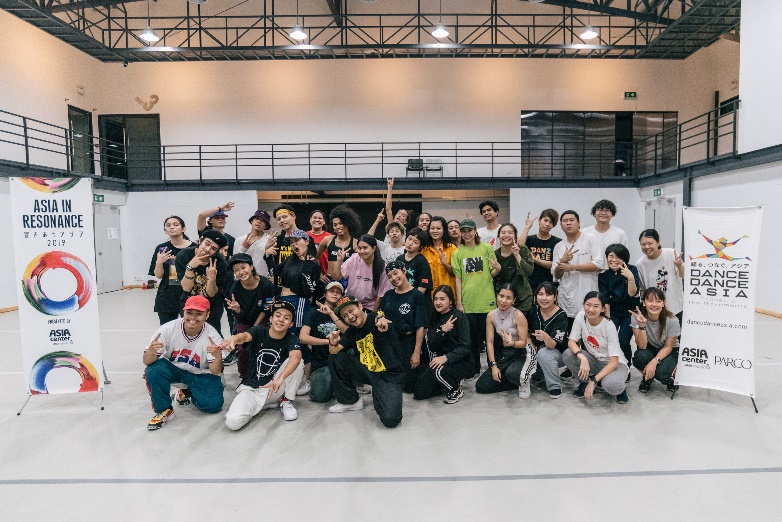 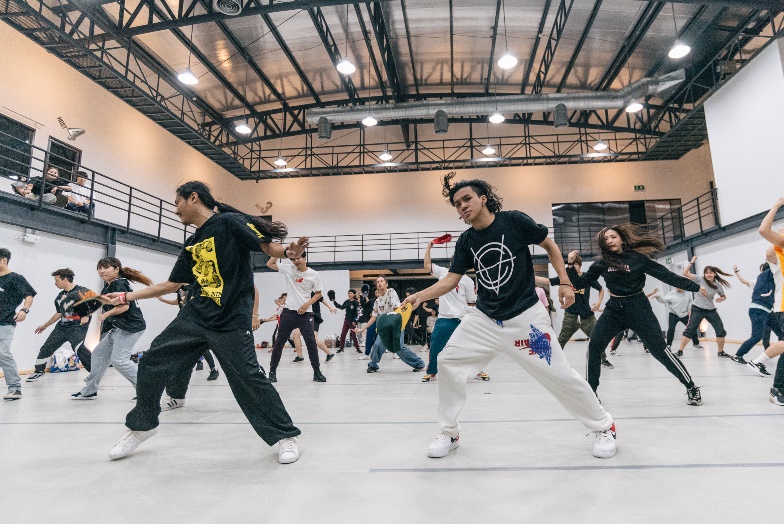 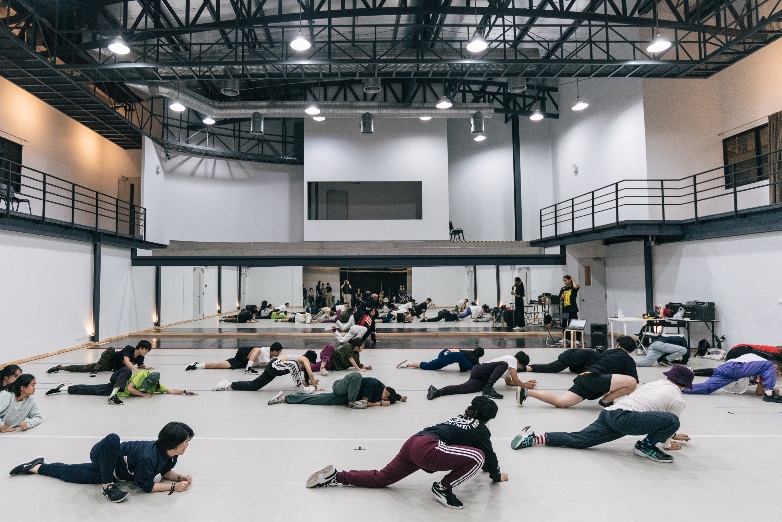 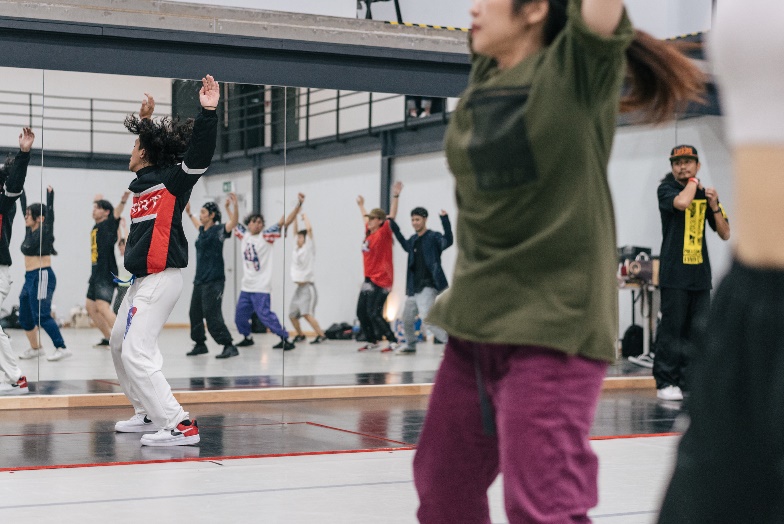 – GROUNDBREAKING NEW DANCE STYLES FROM THE STREETS OF ASIA –