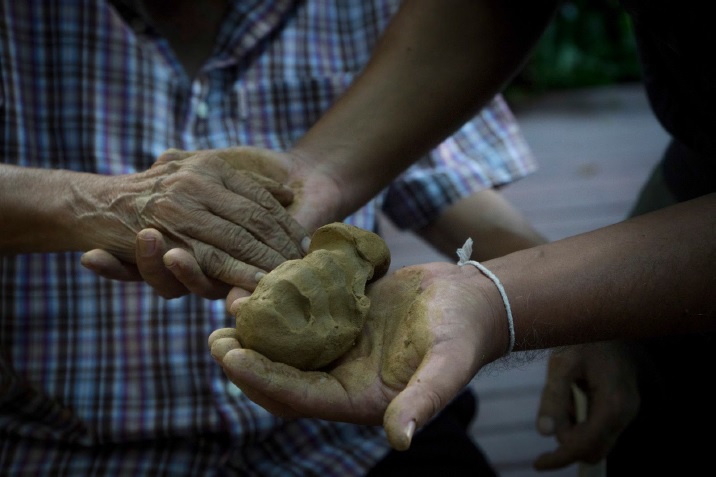 REVISITED < > DEPARTED was about excavating life’s chronicles to make sense of existence from those who shape, but ultimately depart from it. This reflective practice was indeed a recurring sequence of which one revisits and departs throughout one’s life. Penned for great admiration and honeycombed with private memories, Rawanchaikul has written three letters to Boonma in 2010, 2013 and 2018 which serve as a focal point to the exhibition. The artistic merit of letters was not a sole object but an entire performance that involves (re)writing and (re)reading to revision what has departed.

With the industrious studio team Navin Production based in the artist’s childhood home of Chiang Mai, Rawanchaikul’s last appearance in Bangkok came in 2008 with the mid-career retrospective Navin’s Sala . Since his early 20s Rawanchaikul has propelled us on an intimate autobiographical odyssey that often blurs fact with fantasy. His works have incorporated a versatile range of media including grand portrait painting, sculpture, comic books, found objects, sound, video installation, interactive elements, and community engagement. He has exhibited at many of the world’s most important art stages, with his work housed in key international collections.

Rawanchaikul has always acknowledged the perennial influence of his undergraduate teacher, the late artist-educator Boonma, and he has paid homage to Boonma on several occasions. REVISITED < > DEPARTED was his most concerted tribute to date. In the early 1990s, Rawanchaikul became a former assistant to Boonma, who encouraged Rawanchaikul to produce radical socially engaged art interventions. In 2013, 13-years after Boonma departed, Rawanchaikul revisited his teacher’s family home in Nonthaburi. Also serving as Boonma’s studio in the final stage of his life, the space is now renovated as the archival Montien Atelier under the management of his family’s estate. The deifying encounter led Rawanchaikul to draw parallels between his artistic mentor and the close paternal relationship with his own father, culminating in a new body of work revealed in REVISITED < > DEPARTED .

As well as debuting previously unseen works, the presentation also incorporates pieces from his celebratory 2015 multi-platform exhibition A Tale of Two Homes held in Chiang Mai. Then the artist sifted the abandoned relics of his former boyhood home above his father’s fabric shop, the O.K. Store, to site-specifically reinterpret the shop-house with markers from boyhood innocence through to uncertainties of middle age. On view in REVISITED < > DEPARTED was a faithful recreation of the O.K. Store that was meticulously catalogued and packaged before being painstakingly reassembled at BANGKOK CITYCITY GALLERY.

In collaboration with the artist’s studio and with the support of art and cultural organizations in Bangkok and Chiang Mai, REVISITED < > DEPARTED also hosted a series of workshop and educational programs:

Held at Montien Atelier, the former home-studio of Montien Boonma, is a conversation between Rawanchaikul and Japanese guest speaker Prof.Masahiro Ushiroshoji, who has followed the career of both artists. The tributary event culminates with a reunion of Boonma’s family and a live piano performance in remembrance of the late artist and his wife. (The talk will be in Japanese and Thai.) 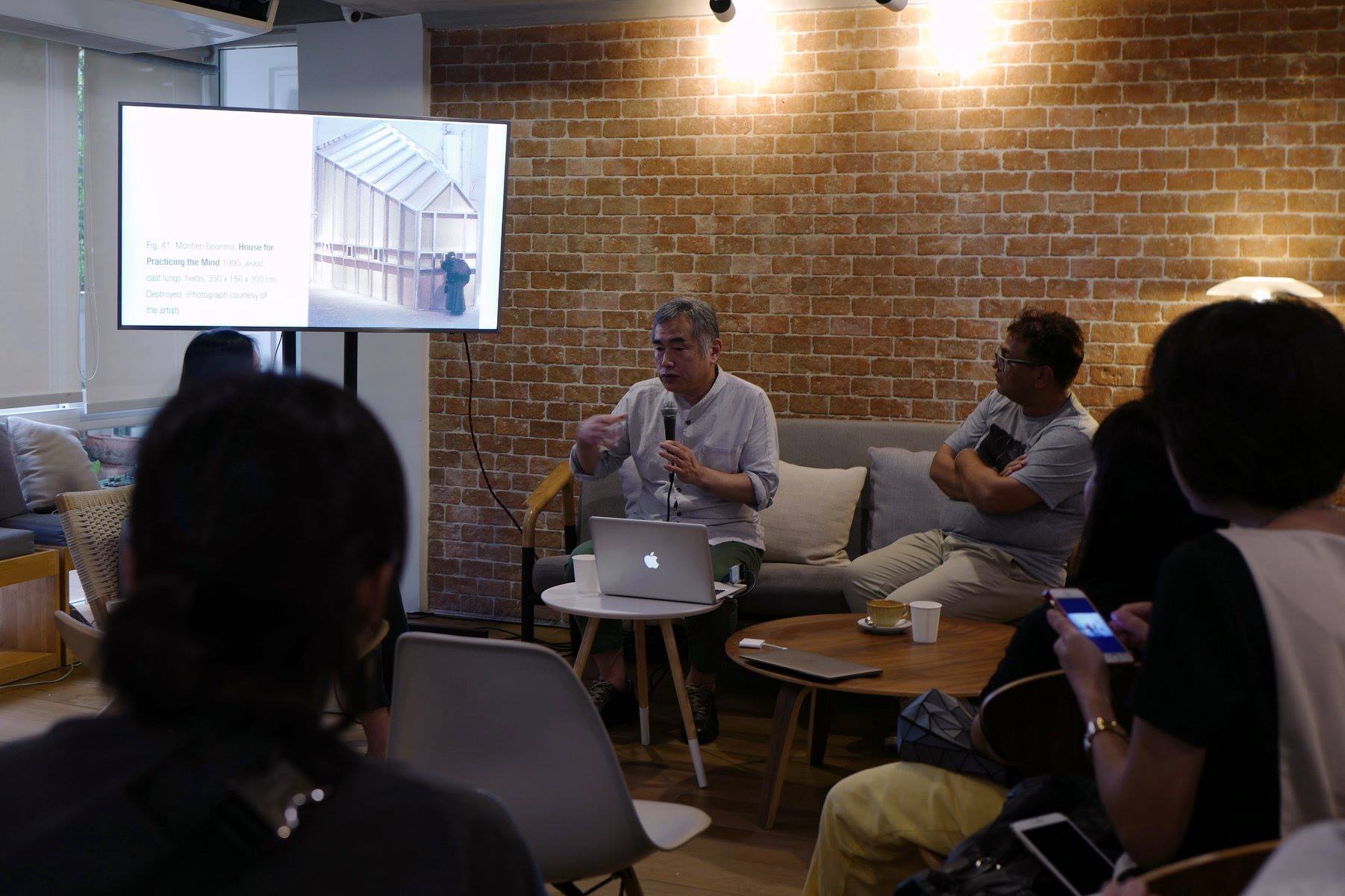 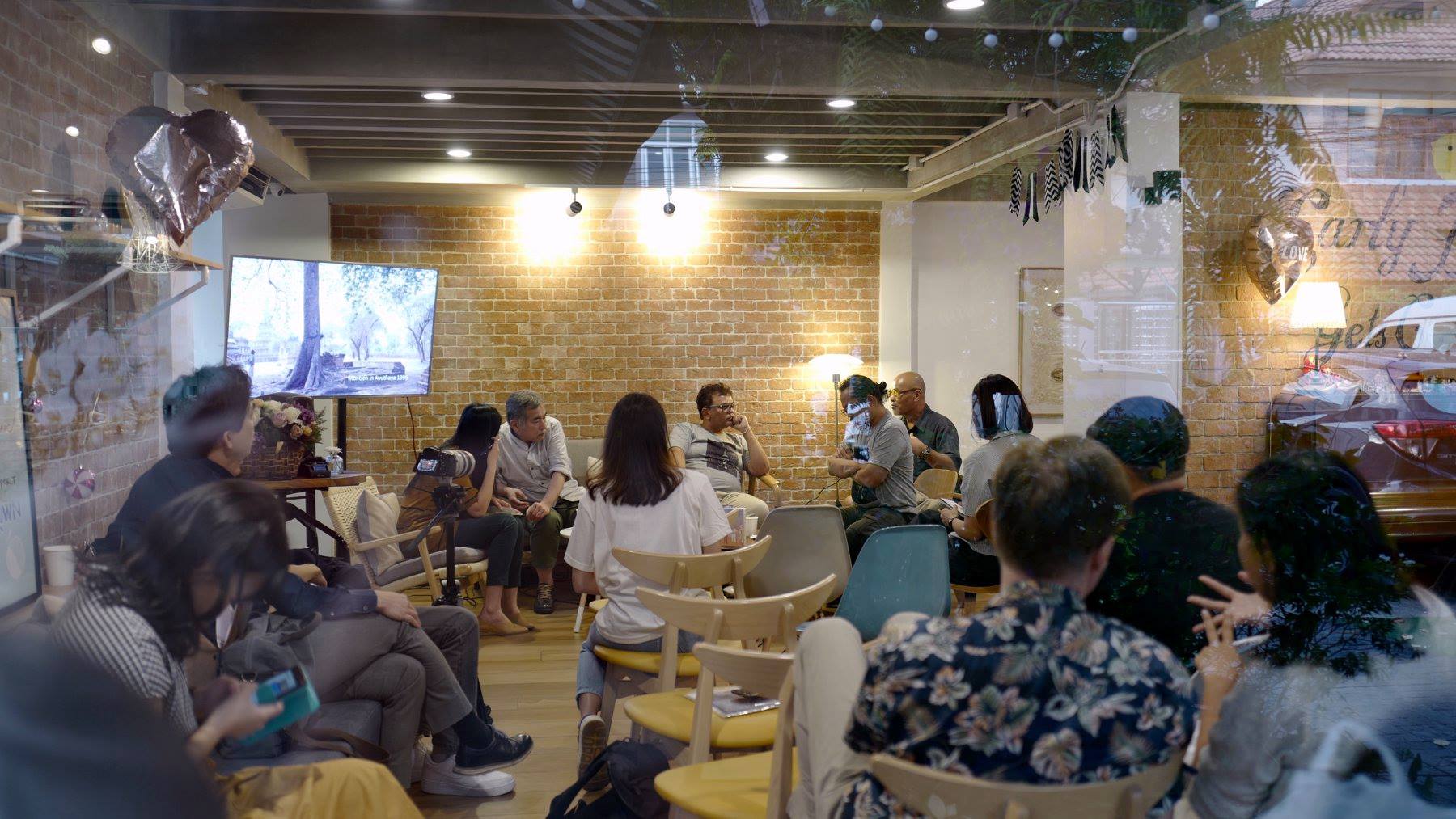 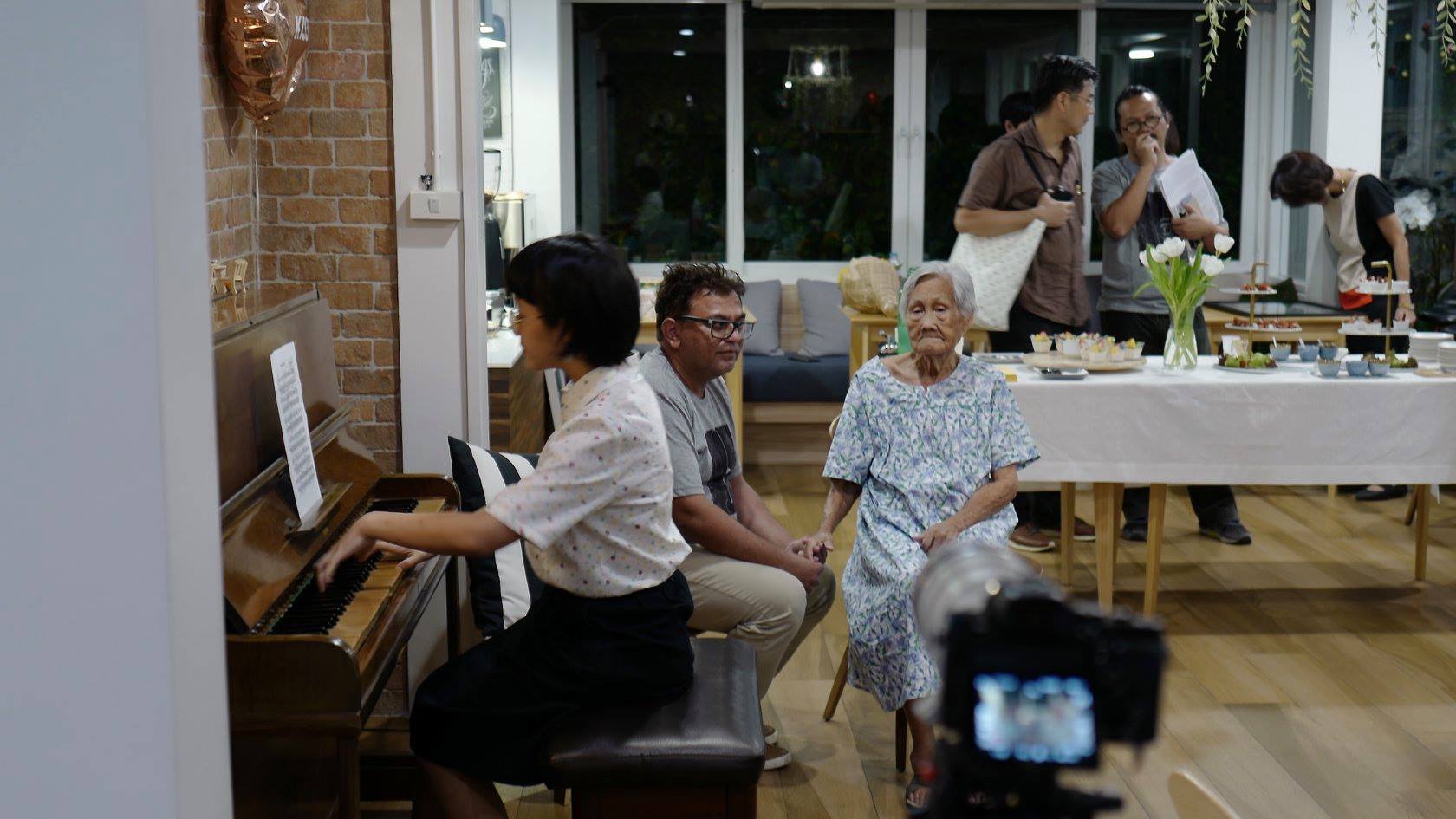 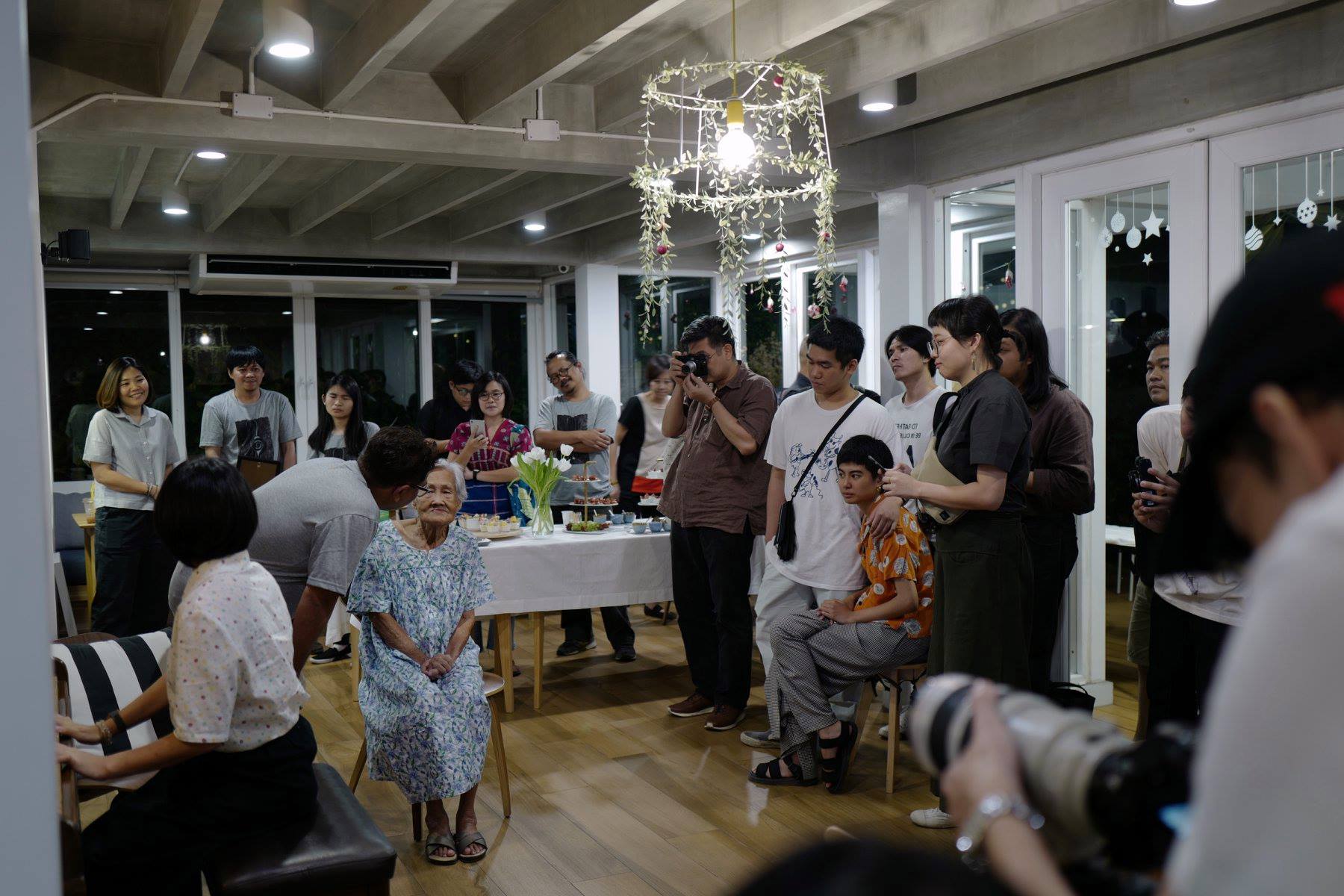 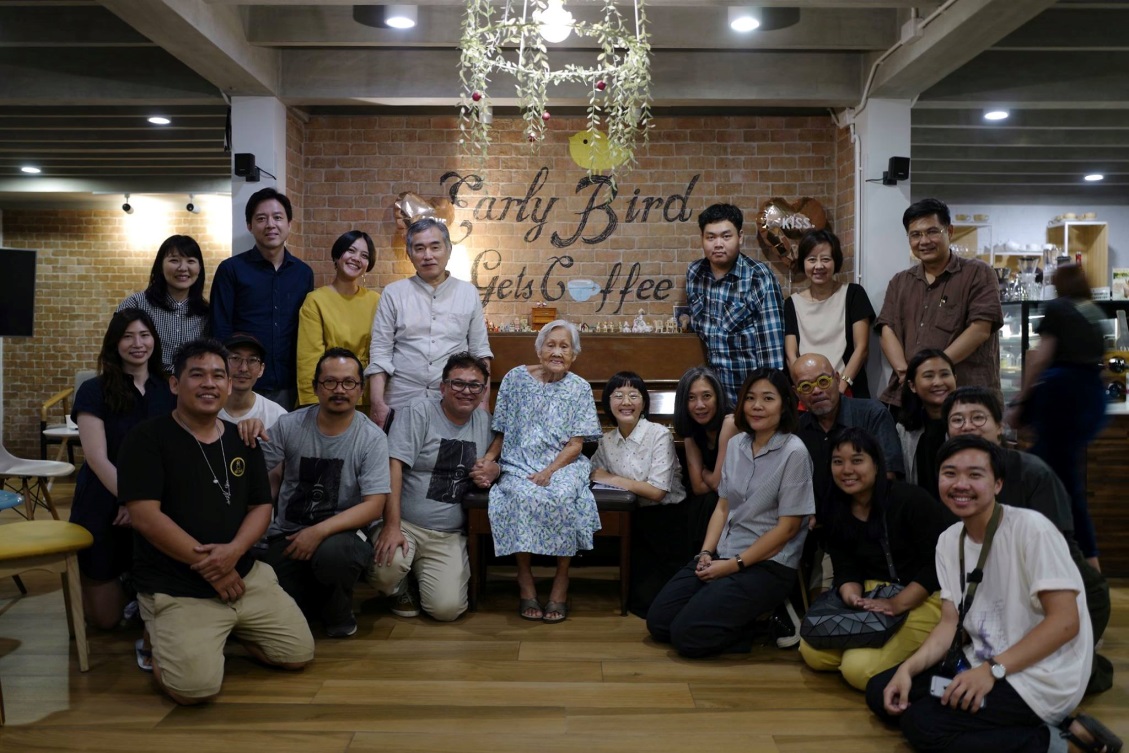 Japanese expert in Asian art history, Prof.Masahiro Ushiroshoji described about the birth of Asian Artists Exhibition in Fukuoka 40 years ago and how that led to the establishment of Fukuoka Asian Art Museum. Considered as Rawanchaikul’s mentor for a long time, Prof.Ushiroshoji also shared a conversation with the artist about his practice and living in Fukuoka as a second home. The panel was moderated by Prof. Somporn Rodboon who served as the advisor for Fukuoka Asian Art Museum. As a well-respected curator and international promoter of Thai artists, Prof. Rodboon also worked closely with Montien Boonma and recently curated an homage exhibition for the late artist in which Rawanchaikul took part. 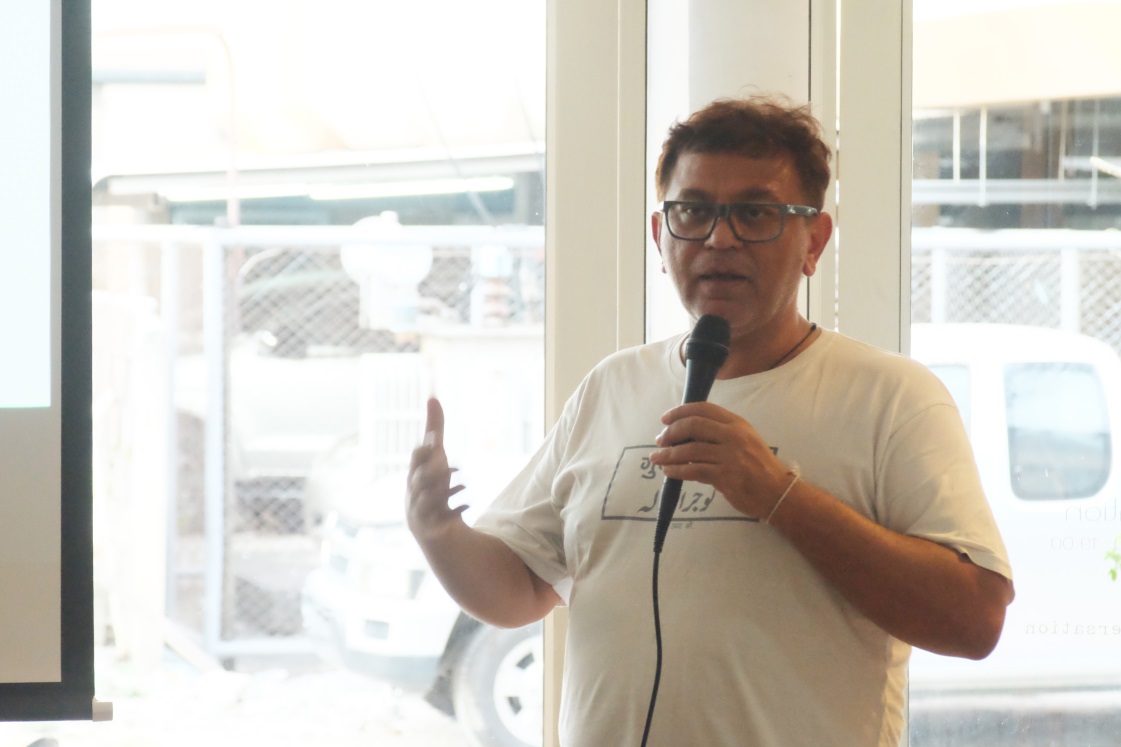 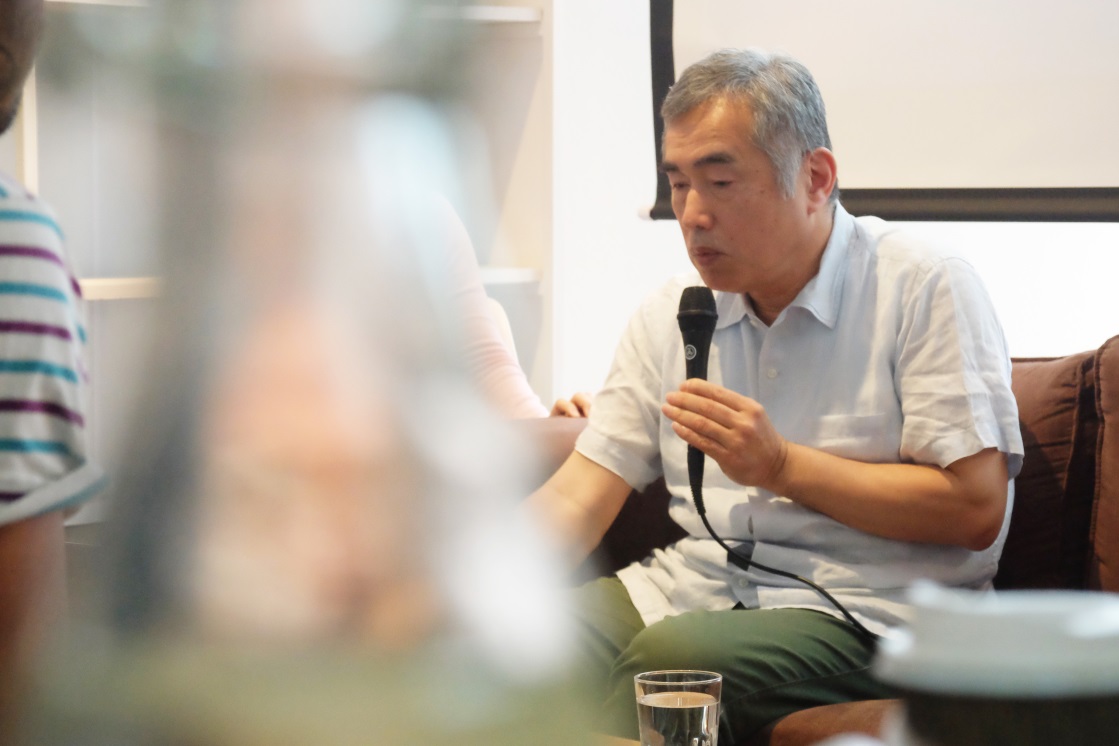 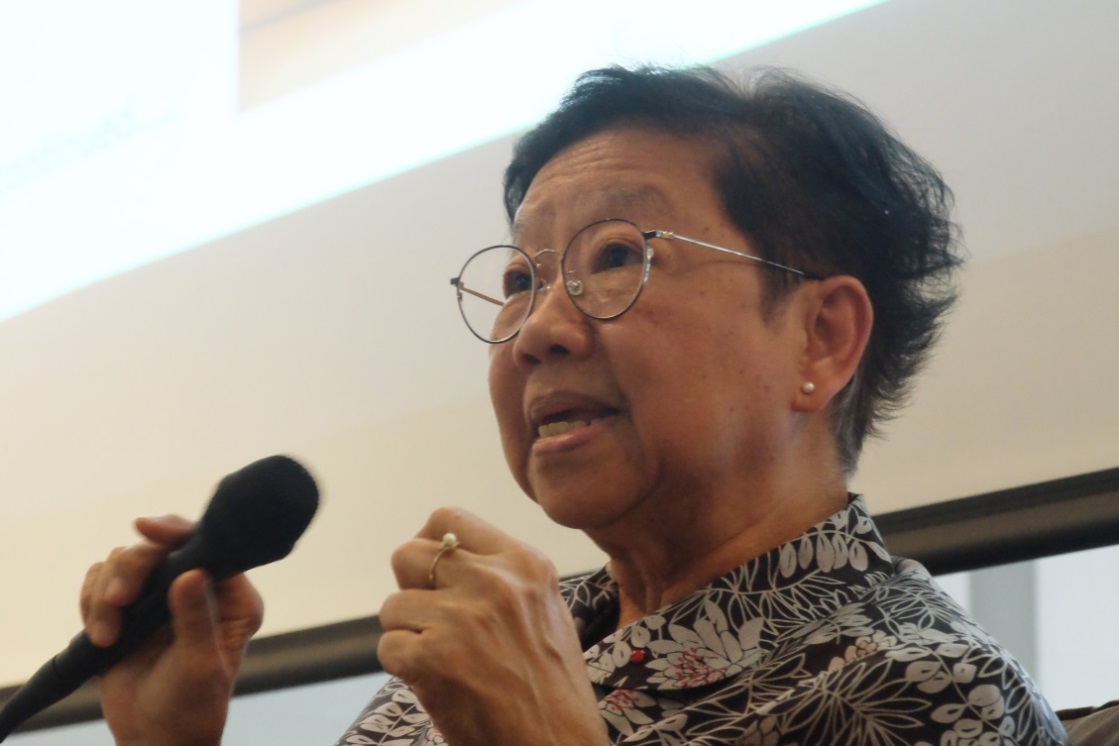 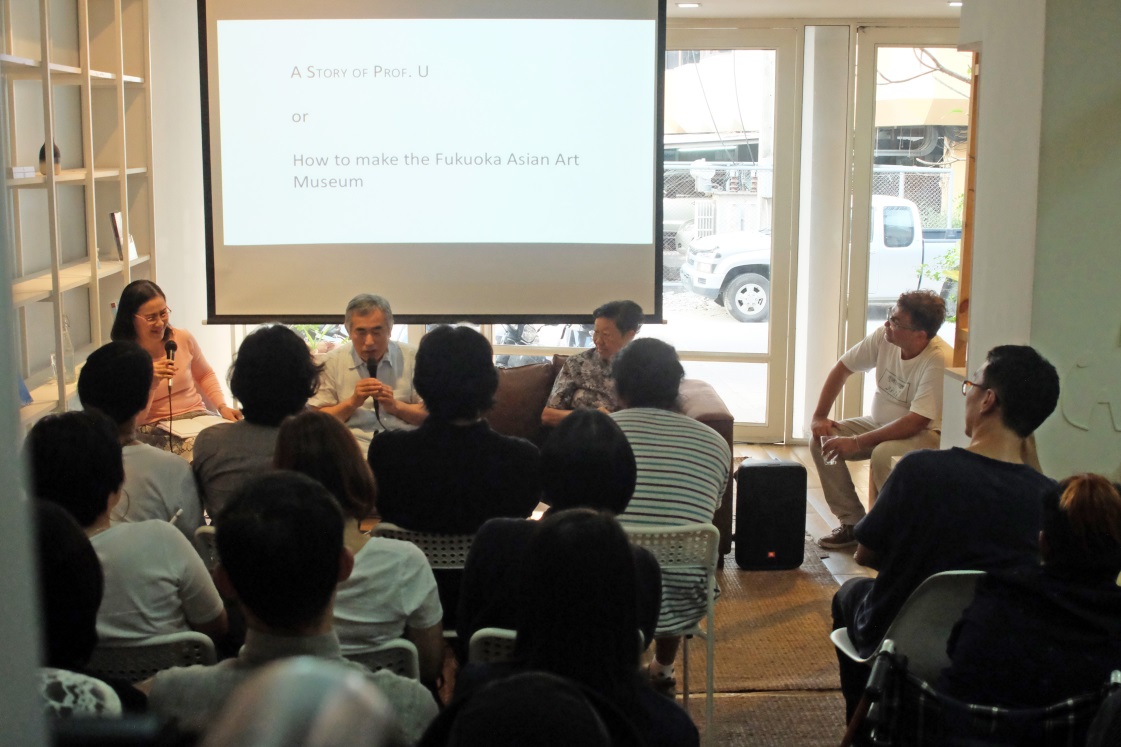 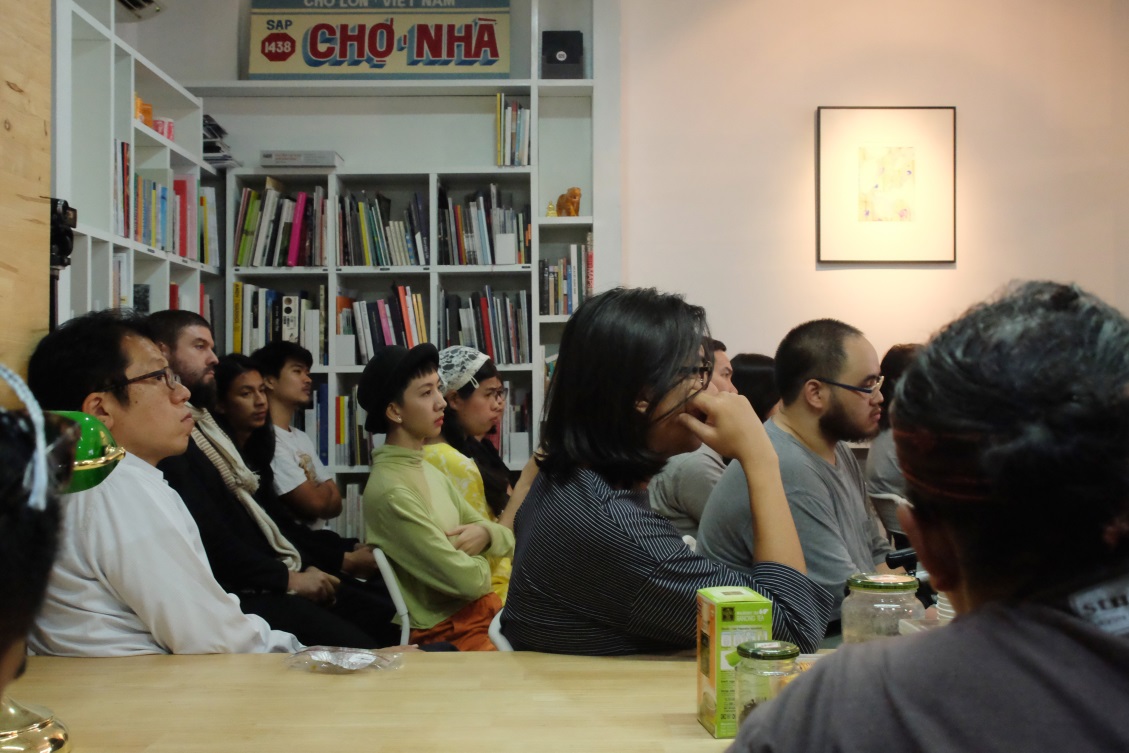 Held in the artist’s hometown and studio base of Chiang Mai, Rawanchaikul relates his practice with the experience of Chiang Mai life. The artist and his studio team shared thoughts on their work and the making of SUPER(M)ART – Is Art Necessary? (2004-2015), Navin Production’s large-scale triptych painting that featured in the museum’s permanent display. As an extension to this epic work, the performative event also included a release of the artist’s open letter written to the late Prof. Silpa Bhirasri, an Italian born artist and educator known as the father of modern art in Thailand. Prominent Chiang Mai based artists was invited to join a roundtable conversation that includes participation from Mori Art Museum’s Associate Curator, Hirokazu Tokuyama. 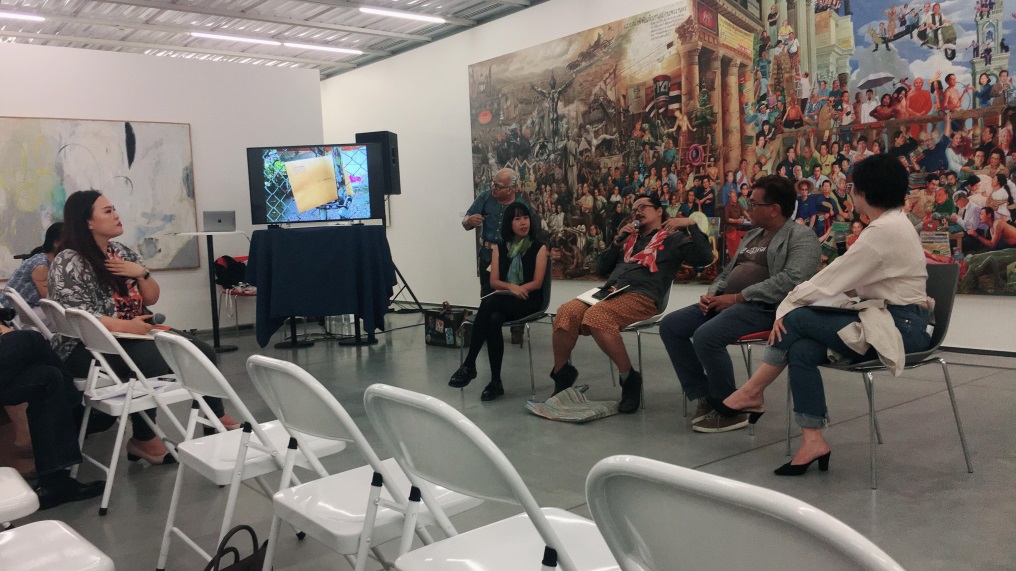 This is a Bangkok version of the OK Festival that Navin Production staged at Roppongi Art Night in 2017. The event began with Rawanchaikul in conversation with Mori Art Museum’s Associate Curator, Hirokazu Tokuyama, who worked with the artist on the community-based project. The talk was followed by a screening of two films that the artist produced in Japan in response to his social engaged practice. The exhibition closes with the OK Night! Party mashup with live music and dance. 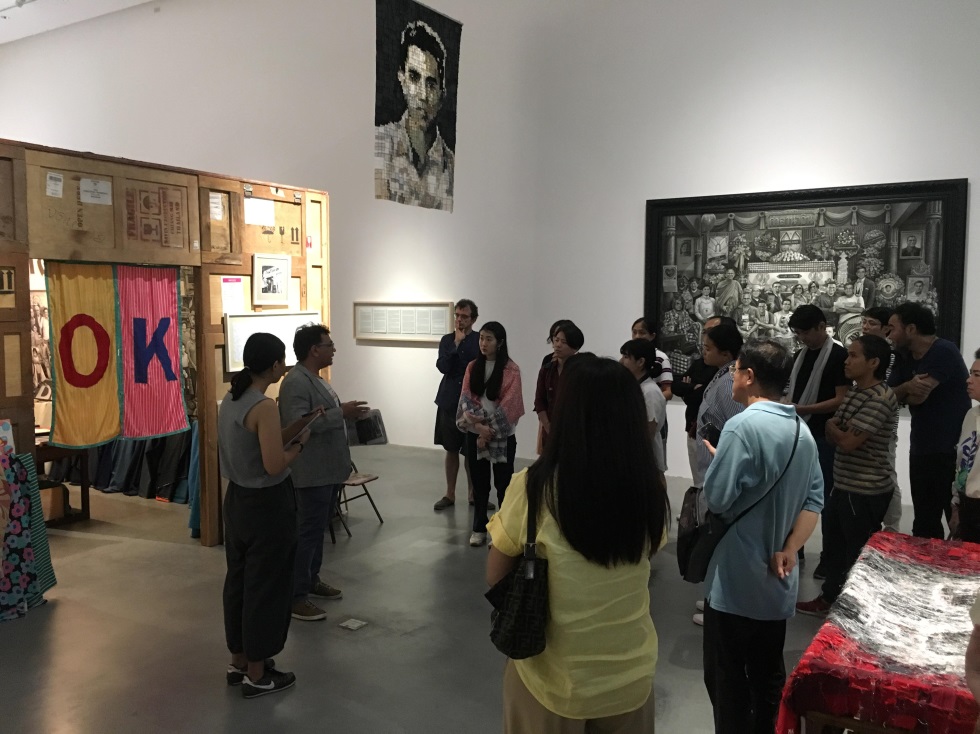 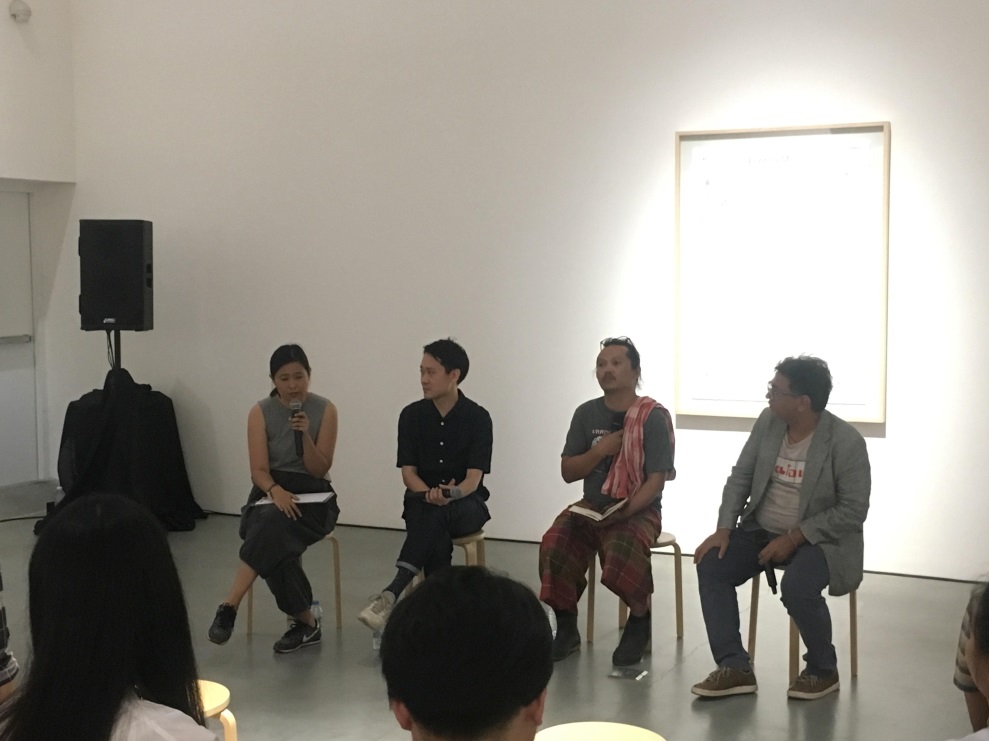 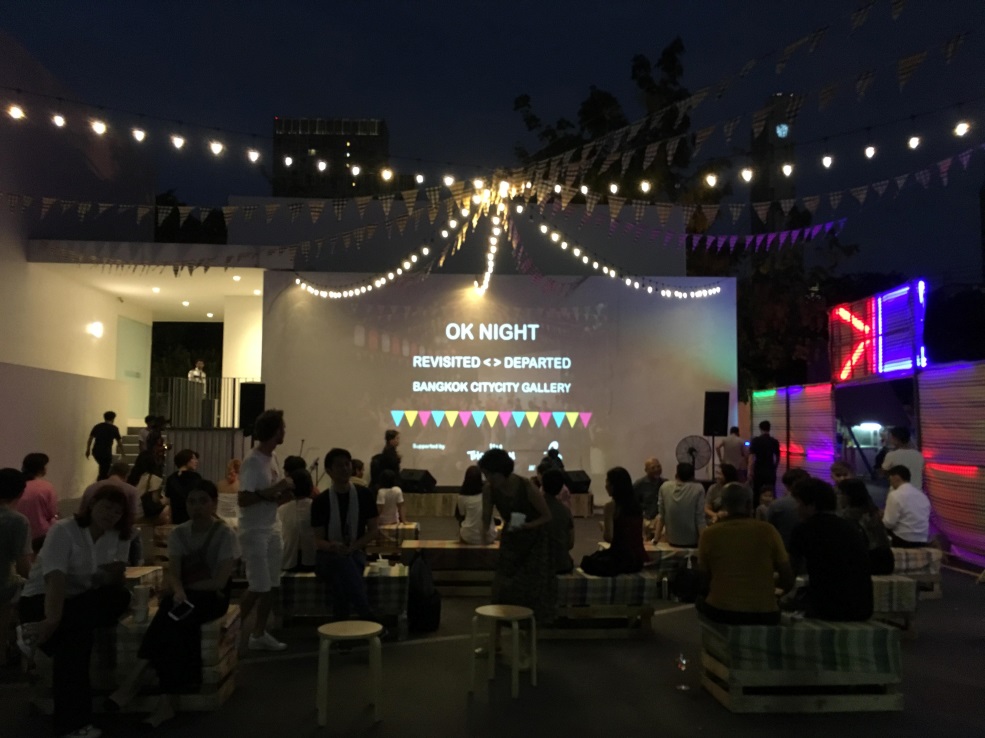 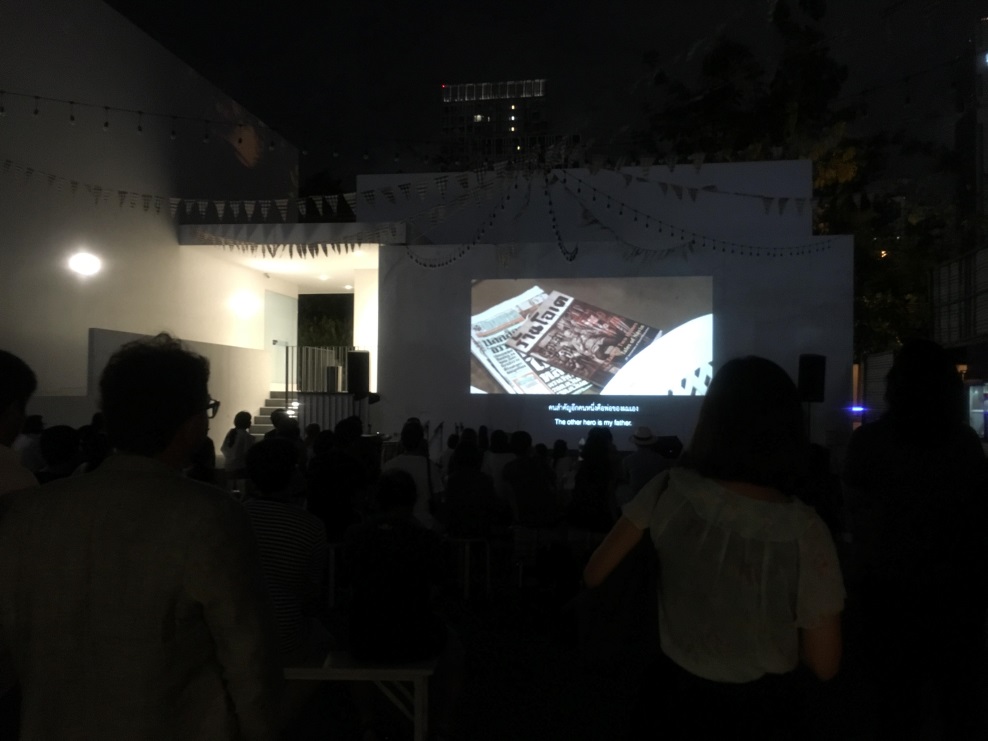 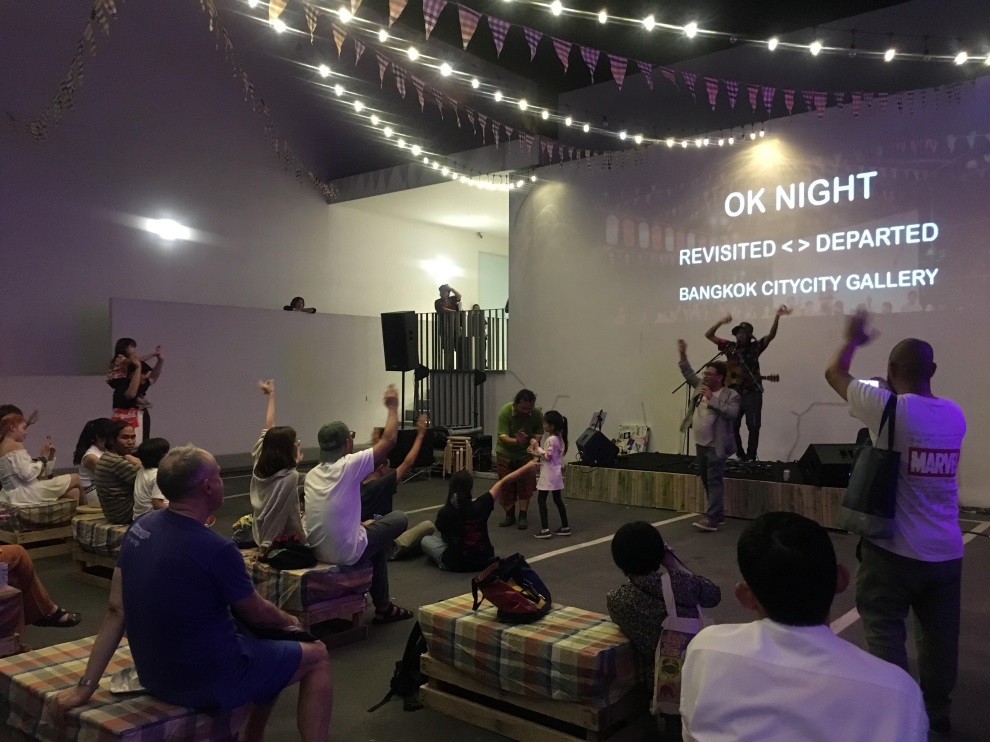